Loading is applied when additional information takes an extended amount of time to process and appear on screen. Skeleton states and the loading component are two interactions that communicate to users that data is currently loading and the screen is not frozen.

Skeleton states are simplified versions of Carbon components used on an initial page load to indicate that the information on the page has not entirely loaded yet. They should only appear for 1-3 seconds, disappearing once the actual content loads in.

A Carbon skeleton state is shown as a stripped down, bare bones version of a component, using a field-01 rectangular block for text. Motion is used in a skeleton state to convey that the page is not stuck loading but rather that data is still being pulled in.

Example of a text skeleton state in a data table.

There are several components that should never be represented by a skeleton state since the data for these items should already be loaded in by the time a user interacts with them. These include:

When utilizing skeleton states, the order in which components, data, and content load in needs to be planned and designed for using the progressive loading technique. Progressive loading is when content loads in batches. The first batch to load should be the most simplified view of the page, followed by the secondary and tertiary batches, with each batch adding more page detail until the entire viewport has been loaded. The primary batch should illustrate a page's structural layout (the skeleton state versions of the container-based components), data-based text (the skeleton state version of text) and non-data text. Secondary and tertiary batches can include images, content below the fold, interactive (action-based) components, and/or data-based text. Remember that not all items need a skeleton state, but instead can be expressed as negative or white space until they load in. For example, a 600 x 600px image could be shown as a 600 x 600px area of white space until the secondary or tertiary batch when the full image loads in.

The skeleton state for most components can be displayed simply by adding a modifier class of bx--skeleton to the component while data is loading and then removing the class after it has loaded in. You will have to create your own custom JavaScript to implement this based on your environment.

If you are using our React library there are separate skeleton state components available to display while data is loading. View an example of this for React.

A loading component is a rotating shape indicating the application is processing and informing users that the system has reacted to an action taken.

The loading component should be used when the entire page is processing; for example, when data is being submitted or saved by the user. 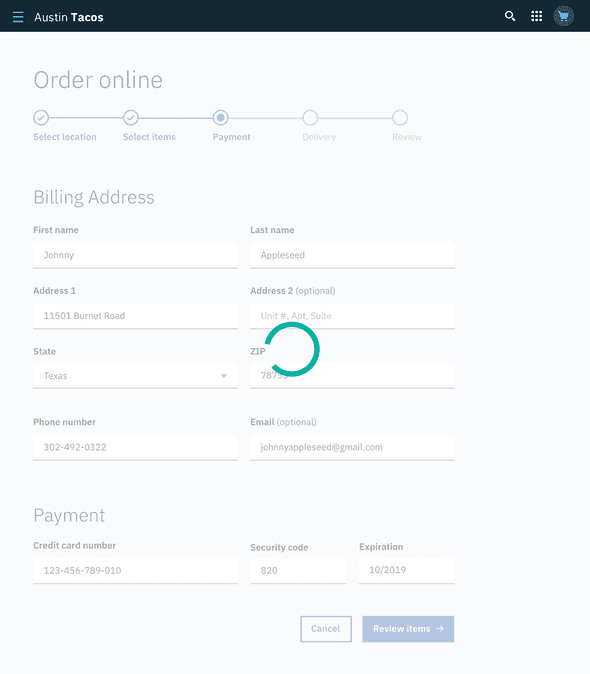 Example of a large loader in context.

Example of inline loader in context.

A 'Load more' button may be used to extend a list where there are a large number of options (25 or more) that the user can choose from. It can also be used in cases where the list of options is populated via a database. Using 'Load more' allows the data to load in progressive batches.